The most eagerly awaited event in the Czech running calendar has celebrated its winners today, with Kenyan Nobert Kigen becoming “The New King” of the Volkswagen Prague Marathon, with a time of 2:07:54, and the Ethiopian Bekelech Borecha triumphant among the women, in 2:2:56.

Jiří Homoláč garnered a third Czech title, saying “Reaching the thirtieth kilometer, I started to feel a cramp in my foot, so I was afraid I would not finish, but I made it,” he rejoiced. Marcela Joglova was the best Czech woman.

“The sunny weather was not conducive to fast times, but more importantly, it certainly contributed to a beautiful race and a great atmosphere,” RunCzech Organising Committee President Carlo Capalbo, whose race boasts the World Athletics Elite Label Race, stated.

Over eight thousand competitors set off from the Old Town Square to overcome the 42,195 metres of the course leading past the beautiful Prague monuments and scenery. Due to the clear sky and sun, the already warm 15C at the start, soon went up to 23 °C.
Ethiopian Bekelech Borecha was the first the women’s home. She covered the course in 2:22:56, improving her personal best by almost two minutes! “I worked very hard, I wanted an even better time. But I am still very happy and I’m delighted to take the victory,” said the new Prague champion.
However, the Volkswagen Prague Marathon was not only about winning among the individuals but also celebrating the new team concept of the Battle of the Teams, which brought excitement until the very last moment.
Each of the six teams (Volkswagen, Mattoni, ČEZ Group, Birell, adidas Runners and Generali Česká pojišt’ovna) had four scoring professional athletes in the starting field, the fifth scorer being the combined efforts of the hobby runners. 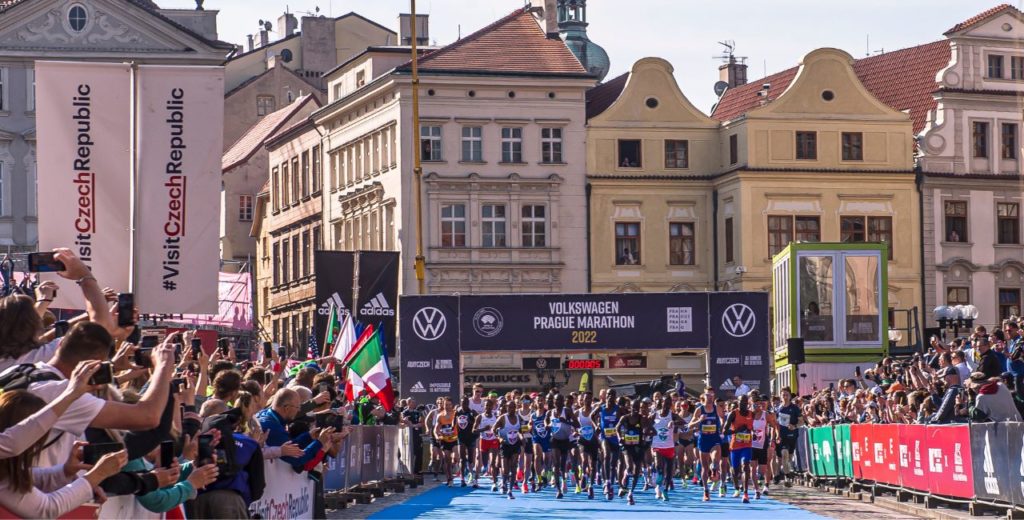 RunCzech has been organizing marathons in Prague for more than a quarter of a century. Due to this fact, the Czech capital has become one of the world´s top 10 cities in terms of race quality and popularity among the people.

The economic, social and environmental benefits of the race for the city are priceless. According to an independent study, RunCzech races bring 28 million Euro in direct economic benefits to Prague, much needed after two difficult years for the city.