Public Transportation and Bikes in Prague

Using public transportation with your bicycle has been getting easier in the last couple of years. Nowadays you can travel with your bike by metro, trains, ferries and in certain eras also by trams. But there are certain rules and restrictions that you need to follow.

In the metro, you can transport your bicycle on the front and back platforms of every carriage excluding the front one behind the driver. Every platform can take up to two bikes at a time. To make sure you´re in the right spot, you can check the signs on the door. 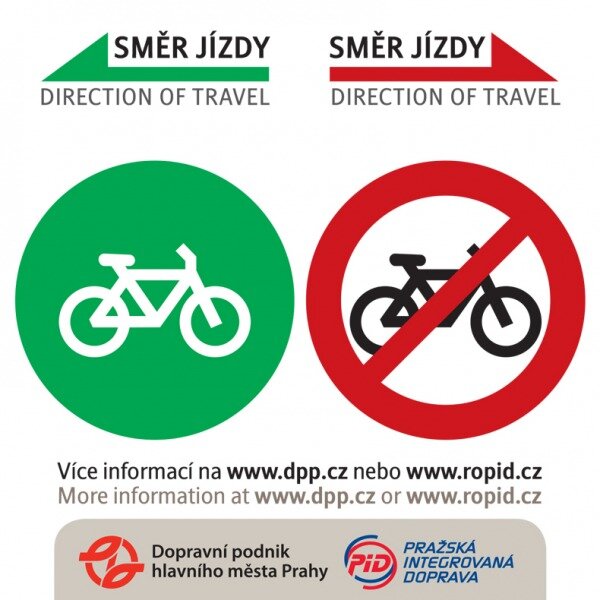 Currently, all the trains operating as part of Prague´s public transport have space for bikes. Within Prague, unlike outside, you don’t need to pay extra to take the bike with you on the train. Outside of the city, you´ll need to pay for the bike based on the tariff of the carrier. If you travel with your bike during the summer season, it’s highly recommended to make a reservation as the number of bikes on the train is limited.

On the tram, you can transport your bike only in certain areas in directions out of the city. All the tram stops from which you can get on with your bike have a sign listed below. On the tram, you can get with your bike only to the areas dedicated to transportation of strollers, those are usually the lowered areas or the platforms at the back of the tram. Such a place can take only up to two bikes at a time. It’s recommended to give a sign to the driver that you want to travel with the bike as he is allowed to refuse to take the bike when the tram is packed.

On the ferries, you’re allowed to travel with your bike. Just listen to the instructions of the staff as they will instruct you where to put the bike. You don’t need to pay anything extra to take the bike with you on the ferry.

Traveling with your bike by bus is prohibited. The only exceptions are the two special cyclo buses operating on nonworking days between the end of March and the end of October. Those buses are equipped with bike racks.

I’m a lifelong cyclist who runs a small independent bike shop in Prague’s Žižkov. My riding abilities range from mountain biking all the way to BMX. I spent several years living in one of Europe’s cycling capitals, Copenhagen. Together with my friend I attempted to cycle from Europe to Japan and had to stop due to the pandemics.

Those two months on the bike gave me an understanding of bike-packing. If you’re new to cycling, looking for cycling partners, or need anything related to cycling, you can text me or stop by my shop Pavé Cycles for coffee or a public bike ride.