This July, Czech households paid the highest price in Europe for electricity; and yet, something many Czechs see only as a cruel joke, the country remains among the largest exporters of electricity in the world.

The July HEPI index (Household Energy Price Index), which compares the price of energy for households in individual European capitals, shows clearly what is occurring.

People living in Prague pay the highest price for electricity in all of Europe, according to the purchasing power parity of the currency. This index includes member states and countries outside the EU, such as Switzerland, Norway, and Russia.

According to the study, the people of Prague paid roughly 52 euro cents per kilowatt-hour in July. That is roughly twice as much as what residents of Bratislava pay and approximately three times more compared to the costs of residents of Budapest or Moscow.

Electricity prices in Prague are high even in absolute terms, without conversion, that is, according to the purchasing power parity of the currency.

In this case, Prague residents pay the fourth-highest price in the EU, roughly 41 euro cents per kilowatt-hour. Only residents of Copenhagen, Rome, and Amsterdam have more expensive electricity. 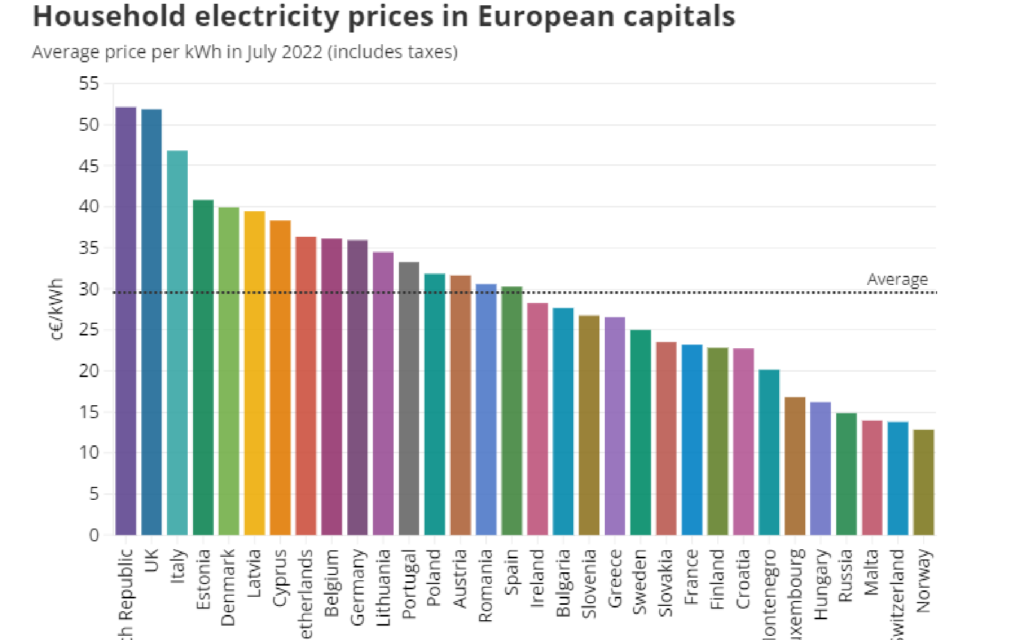 At the same time, Czechia is one of the largest exporters of electricity, even on a global scale. According to the EnAppSys analysis, the country exported 5 million megawatt hours of electricity more than it imported in the first half of this year, making it one of the biggest net exports in the EU.

Only Sweden, Germany, Bulgaria, and Spain exported more electricity during the first six months of this year. However, the price of electricity, calculated based on purchasing power parity, is average or below average in their capitals. The exception is Berlin because, in Germany, relatively high taxes are applied to electricity.

In addition, Czechia has long been among the top 10 largest exporters of electricity in the world. Last year, it ranked sixth. Currently, in the era of dramatically rising electricity prices, the Czech Republic stands out. Paradoxically, despite its relatively high net exports and significant surplus in its electricity production, the country has the highest electricity price for households in all of Europe.

The key reason is the intensive Czech involvement in the single energy market in the EU. From the point of view of the energy market, Czechia is less a sovereign country and more a state in the EU project where energy can be bought and sold.

However, taxes also play a role. The tax burden on electricity for Czech households is significantly higher than what would correspond to the average of EU countries. In the Czech Republic, taxes, especially VAT, represent 24 percent of the price of electricity for households, according to the HEPI index. In the EU, it is only 18 percent on average.