Thunderstorms, hailstones the size of tennis balls and a tornado of over 200 kilometers per hour hit the Břeclav and Hodonín districts in South Moravia.

Moravská Nová Ves, Hrušky, Mikulčice, Lužice and Hodonín were the spots that suffered the most. Some 1,200 houses were damaged and six lives were lost.

The leading bands of the Czech music scene have also decided to help, performing on Wenceslas Square as part of the Together for Moravia concert on Wednesday, July 7 at 8 pm.

According to the organizer, all proceeds from the concert will go to Via Foundation, an independent, Czech community and philanthropy development foundation that has raised more than CZK 204 million to date.

You will be able to watch the concert live on YouTube, social networks of some performers and national and local media but also in regional TV broadcasts, such as Zlín TVS, Strakonické TV, Television South Bohemia, Svitavy CMS TV and others.

“I am impressed that not only the performers but also everyone who is helping to organize the concert from the stage, LED screens, lighting, sound, boxes, aggregates, mobile fencing, and toilets to the accommodation of non-Prague technicians, tents, the internet provider and many others participate for free. The sole and main goal of the concert is to raise as much money as possible and help people from affected communities. Thank you all for joining forces for a good and necessary cause,” says Robin Suchánek, the organizer of the Together for Moravia concert.

During the concert and its broadcast, people will be able to contribute in different ways: through the web platform and directly to the public account of the Via Foundation No. 200900222/0800. 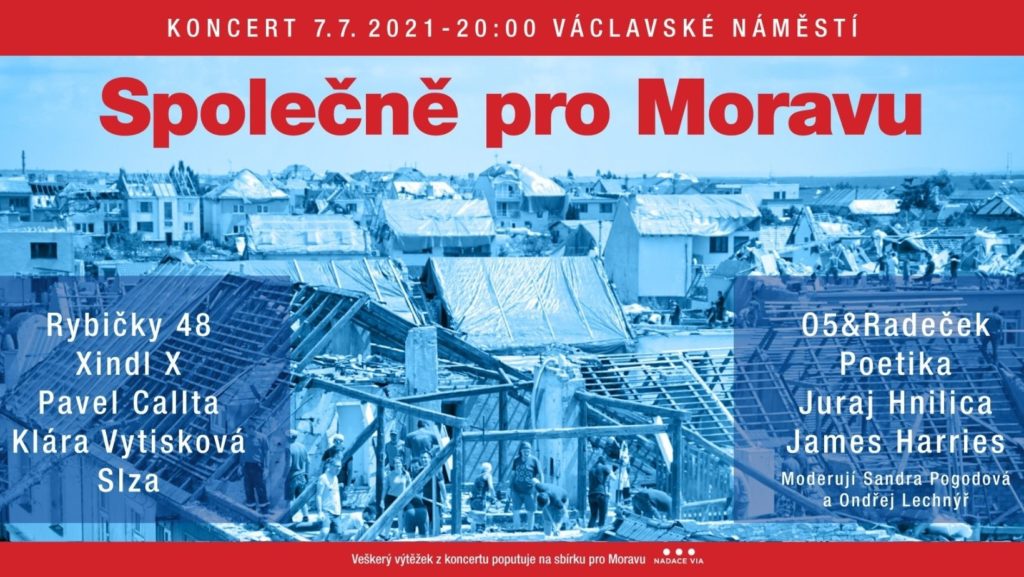