'Spider-Man: Far From Home' Filming in Czech Republic This Month

The Web Slinger is abandoning his friendly neighborhood and embarking on a world tour in Spider-Man: Far From Home, which is currently filming in London. But it sounds like Marvel Studios is getting ready to take the production elsewhere in Europe.

Sony’s next Spider-Man film will shoot in Prague and Liberec later this month. The movie was already announced to be set in Europe, with some scenes taking place in Prague, so we can expect to see more news coming out of the country in the coming weeks.

A casting call from the agency Extrafilms indicates that director Jon Watts will be filming a carnival scene in Liberec, and that they are currently looking for extras to portray jugglers, hula hoop dancers, and folk dance groups.

Little is known about the Marvel Studios film, and the company would like to keep it that way as we get closer and closer to the release date of Avengers 4.

After Avengers: Infinity War completely shifted the landscape of the Marvel Cinematic Universe, everyone wants to know what will happen in the untitled sequel. And Spider-Man: Far From Home will be the first film released after the crossover event wraps up, so of course fans are eager to glean what clues they can from set photos and casting information.

While producer Kevin Feige isn’t willing to reveal his hand just yet, he has hinted the importance of the film’s title and what the franchise means for Marvel Studios’ future.

“Much like Ant-Man, there are things that people know about that movie, which is a great deal of the movie: the villain of the movie, the storyline of the film, that we’re shooting in Europe and that Peter Parker goes on continuing that [Captain America: Civil War] was a big giant superhero class movie. The fall out of that in Homecoming was John Hughes and him going to his high school. So that’s what’s fun to us about the Spider-Man movies. And again going from Infinity War to Ant-Man and the Wasp, the tonal shift.”

We’ll find out more when Spider-Man: Far From Home premieres in theaters on July 5, 2019. 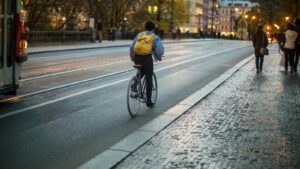