Martin Dlouhý, professor at the University of Economics in Prague is refusing to teach any Russian student as he launches his “own sanctions against Russia”.

The representative of TOP 09, has launched his own sanctions against Russia when he wrote on social networks that he refused to teach Russian students. He later deleted the post.

“Because of conscience and moral principles: I will not conduct Russian bachelor’s or master’s theses. I will not teach Russian students. I will not correct their tests,” he wrote on Facebook in a status that later disappeared. 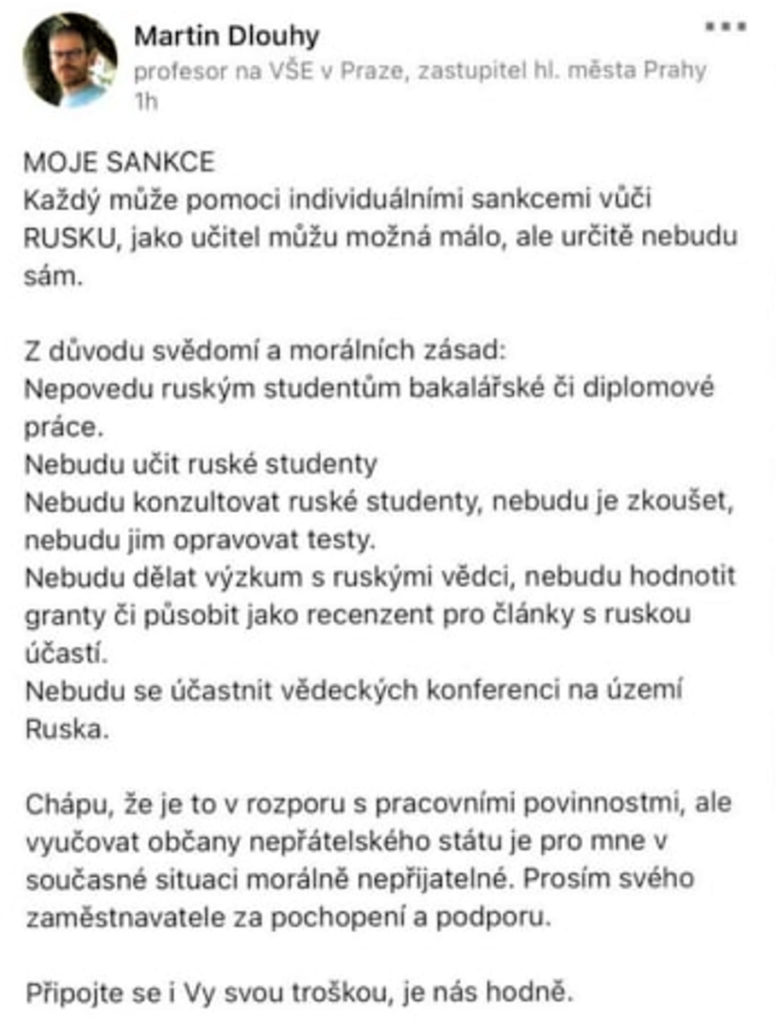 Dlouhý admitted the authenticity of the statement, as well as the fact that he wrote it upset by the night and morning events in Ukraine. “I was upset in the morning and wrote down my emotional status,” he said, adding that he had a lot of Russian students. “No one has to worry about being thrown out of the classroom,” he said in the afternoon.

He eventually removed this status from Facebook after he began to show negative reactions. “They accused me of using collective guilt,” he said. But he didn’t want that, he said.

The chairwoman of the TOP 09, Markéta Pekarová Adamová, and the chairman of the Prague TOP 09, Jiří Pospíšil,  also criticized him.

Dlouhý’s attitude was also condemned by the Vice-Chairman of the Academic Senate of the University of Economics and Doctoral Student Lukáš Hulínský. He is considering filing a complaint with the school’s ethics committee.

“This behavior definitely does not belong to the academic field, and it must be addressed. I have full confidence in the faculty management and am in contact with the dean. So I believe that this will primarily be dealt with by the faculty, which in no way approves of this behavior,” he said.