A report published by the U.K.-based insurance company William Russell ranked the “safest cities in the world,” according to people’s perceptions.

On this list, which relied on perceived crime rates on the crowdsourced global database Numbeo, Asia and Europe dominated the rankings of “safest” cities.

Taiwan’s Taipei scored the highest, while Buenos Aires, Argentina, ranked the lowest (score: 36.7), according to the report. 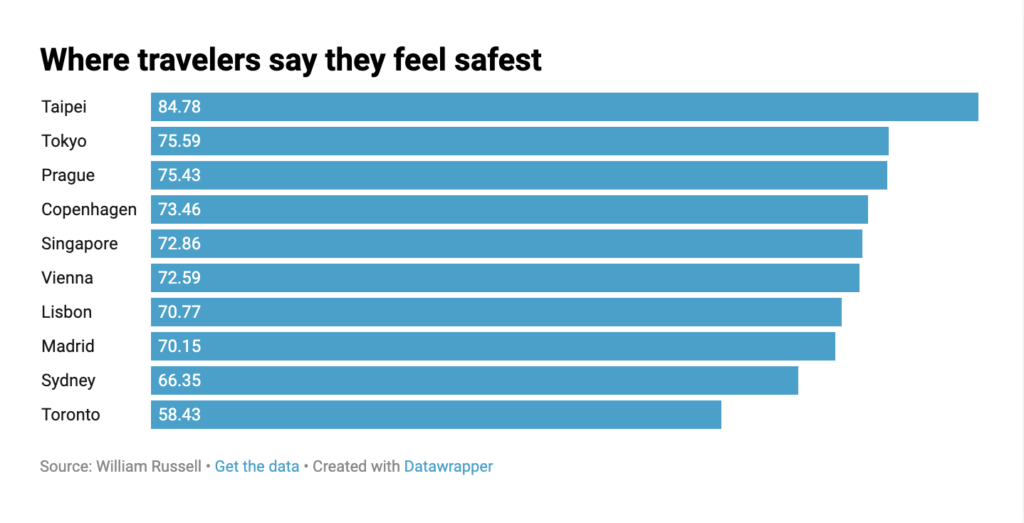 “The long-term goal is to change the image of the capital. It is important to increase the number of tourists who are interested in the culture and history of Prague and to decrease the number of tourists who are only interested in late-night drinking. That is a task that must be tackled across the board through a number of councillors – such as territorial development, culture, housing and airbnb regulation, but also city property management,” said Prague City Councillor Hana Třeštíková (Praha Sobě)

Terezie Radoměřská, mayor of Prague 1, points out that despite the latest success, the metropolis should not rest on its laurels. “Third place is not first, therefore there is still room for improvement. We must not forget the various minor assaults and altercations related to alcoholism,” she points out.

But the top five places for “health and safety” in Euromonitor International’s “Top 100 City Destinations Index 2022″ are different.

That ranking, published in December,analyzed “political stability and social safety,” which includes the impact of Covid-19 (such as total cases, death and vaccination rates) as well as road injury accidents, government corruption and terrorism statistics.

Here, cities in the Middle East and Asia came out on top.

A report by the travel security firm International SOS not only analyzes infectious disease risks, but also factors that can affect medical care, such as quality of specialist and emergency services, availability of medicines and language barriers.

Its Travel Risk Map 2023 shows that much of North America and Western Europe — as well as places like Turkey, Israel, Japan, Singapore and the United Arab Emirates — have “low” medical risks. The countries colored in purple have “significant variation” in medical risks, which can mean discrepancies in care levels between cities and rural areas, according to the report.