St. Vitus Cathedral at Prague Castle, the seat of Czech kings, holds a priceless treasure: the Bohemian crown jewels which were used in the coronations of the country’s monarchs.

The crown jewels, including a crown, orb, and scepter, are kept in a vault in St Vitus’ Cathedral. The chamber has seven locks, and seven significant Czech figures including President Miloš Zeman hold the keys.

“For four years, this state treasure has been hidden from public view. And that’s a shame. As one of the seven keymen, I, therefore, propose the display of jewels. Our protocol department is already trying to arrange a possible meeting with the Castle,” said Prague Mayor Zdeněk Hřib.

The crown jewels were originally held at Karlštejn Castle. Since 1791 they have been kept in St Vitus’ Cathedral at Prague Castle.

The crown was made for the coronation of Charles IV in 1347 and is the fourth-oldest in Europe.

The crown is made from 22-carat gold with 19 sapphires, 30 emeralds, 44 spinels, 20 pearls, one ruby, one rubellite and one aquamarine. At the top of the crown is the cross, which allegedly has a thorn from Christ’s crown of thorns.

The scepter is 18-carat gold, with four sapphires, five spinels and 62 pearls with a large spinel mounted on top of the scepter. The orb is made from 18-carat gold with eight sapphires, six spinels, and 31 pearls. It is decorated with scenes from the Old Testament. 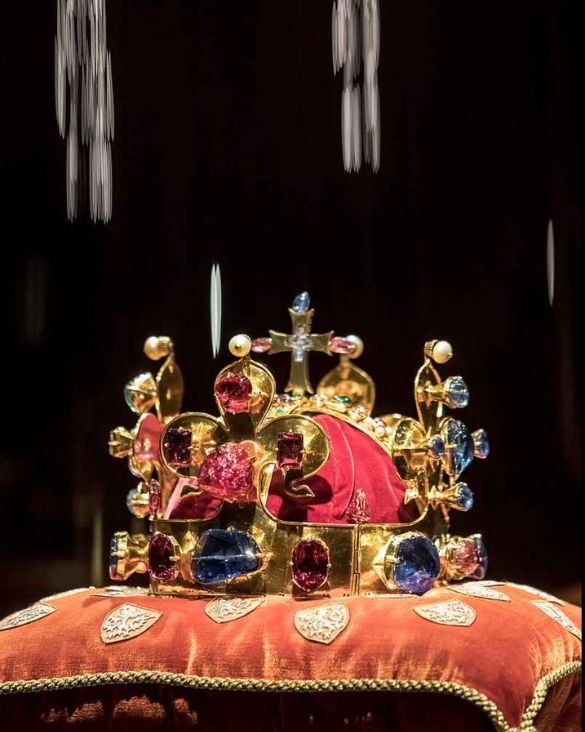 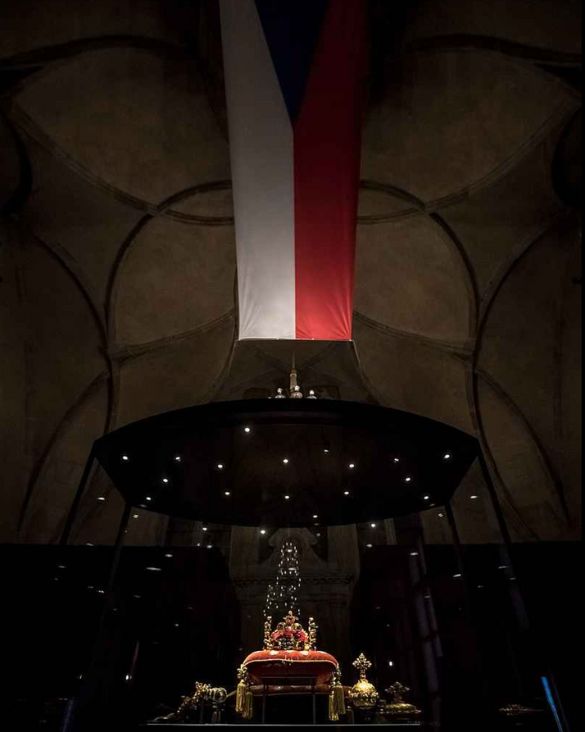 The St. Wenceslas Crown – wrought of extremely pure gold (21 -22 carat), decorated with precious stones and pearls – is the oldest item of the Crown Jewels. It weighs almost two and a half kilos and, including the cross, reaches a height of 19 cm. Likewise, its diameter is 19 cm and each of the four parts of the headband measures 14.5 cm.

Charles IV had it made for his coronation in 1347 and forthwith he dedicated it to the first patron saint of the country, St. Wenceslas, and bequeathed it as a state crown for the coronation of future Czech kings, his successors to the Czech throne. However, perhaps to the end of his days (1378) he continually had the Crown altered and set with additional rare precious stones he managed to acquire. And so the crown developed into its final contemporary image.

The Apple wrought of fine gold (18 carat), weighs 780 grams and measures 22 cm in height. It consists of two flattened hemispheres linked by a decorative circular band and crowned with a fairly large cross.

The circle under the cross bears the inscription DOMINE IN VIRTUTE TUA LETABITUR REX ET SUPER SALUTARE TUAM EXULTABIT (O Lord, in Thy strength the king will be glad and in Thy salvation how greatly he will rejoice). The richly ornamented decorations feature predominantly precious stones and pearls, while the slight little figures of six sphinxes on the base of the cross form a charming detail.

The Coronation Cloak, which has been preserved at Prague Castle, is made of luxurious silk material, called gold lily. A pattern of the cloth is made of a silk thread wound around a flat golden wire (purl). The design of the cloak itself is semi-circular, without sleeves, prolonged at the back to form a train. It is 312 cm wide and measures in length 236 cm from the neckline to the end of the train.