Prague City plans to invest billions in new metro lines, electric buses and other sustainable forms of public transport in the coming years.

The construction of metro line D, which connects the north of the city with the south, officially started last week.

It will be a fully automated metro line, without drivers, with an estimated cost of 2 billion euros, a necessary step if Prague “wants to meet its climate targets”, says Adam Scheinherr, chair of the supervisory board at the DPP public transport company and responsible for the transport portfolio at city hall.

Metro Line D is part of a multi-faceted climate plan in which public transport plays a key role. In addition to metro line D, for example, plans are already in place for another line around the center.

This ‘O’ circle line will have a capacity of 150,000 passengers per day, according to the latest draft proposal. It would become Prague’s fifth metro line with a length of 36 kilometers and 23 stations.

This will no doubt be another expensive project, which Europe could help with. This can be done through the corona recovery fund, but also through one of the other EU funds such as the European Regional Development Fund and the Cohesion Fund.

The exact allocation key for the corona recovery fund is still unknown, but the city council is counting on CZK 2.9 billion Czech for climate-friendly public transport projects.

According to DPP, the metro plans fit in perfectly with the city’s climate targets. “We have promised to reduce the emission levels by 20 percent in 2024 compared to 2010 and by 45 percent in 2030,” Scheinherr says. A good metro system, he says, is essential to get commuters out of their cars. But it is by no means the only measure.

For example, the fleet of city buses is also being given a major upgrade, according to Scheinherr. “By 2030, a third of the buses will be electric. By doing this, we are aiming to use the most modern technologies.” 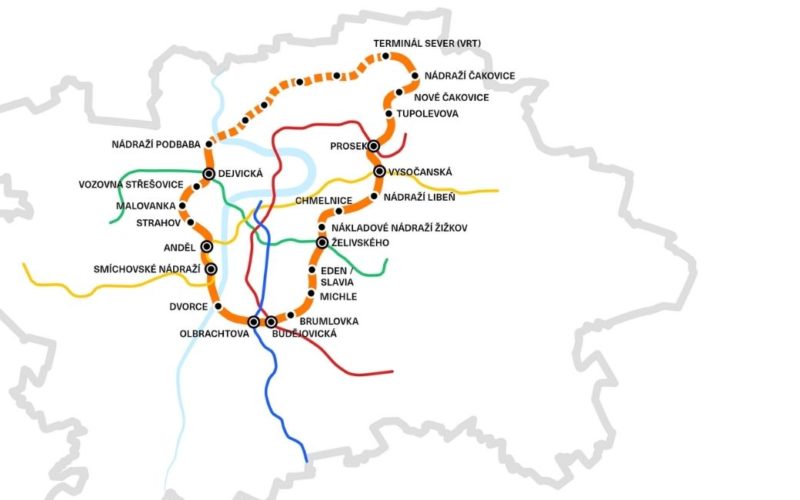 There is still a long way to go though. Prague took delivery of its first electric bus, a Skoda E City in January of this year. Prague is the first city where this bus from Škoda Transportation and the company Temsa will be operating. Another 14 have been ordered that are going to replace old diesel buses. The approximate cost is around 8.5 million euros.

Škoda Transportation – not to be confused with the automobile manufacturer Skoda – will have an important role in the electrification of public transport in any case, as the company also makes trams, metro carriages and trolley buses (with overhead cables).

Another large order has been landed by Poland’s Solaris, which together with Škoda Transportation will deliver 20 trolleybuses of the Trollino 24 model over the next two years.

These will be Prague’s first trolleybuses since 1972. Before that time, trolleybuses were quite common. The first trolleybus line was put into operation in 1936, but in 1972 the last line was closed due to the relatively high maintenance costs of overhead cables and the greater flexibility of diesel buses.

According to Scheinherr, it is this whole package of measures that will modernize public transport and make it more sustainable. Incidentally, these measures are not just about cutting down on greenhouse gas emissions.

“Prague will become a city where buses will not only be emission-free, but also quiet. We will be able to reduce traffic noise, contribute to cleaner air and improve the environment. We want Prague to be an attractive place to live.”

And what will people have to pay for this modern green public transport? So far, not that much. An annual pass in Prague costs as little as 150 euros. That’s not much compared to other metropolises.

You can find the complete climate plan of Prague here.