Not everyone has the same tastes; there are those who prefer the color blue to red, salty food to sweet or stay on the couch instead of going for a run first thing in the morning.

But can there be anyone who doesn’t like a good poké bowl? I don’t think so. Prepared to order using fresh-daily ingredients, the “poké” dish is primarily composed of the same elements used to make sushi (rice, raw fish, seaweed, and more) meaning, the dish is nutritious and delicious.

The best of them all? Prague’s PokeHaus and their brand new location.

The flagship location at Národní třída is situated around the corner from Quadrio Shopping Center, which is best known for one of Prague’s most visited attractions: Franz Kafka’s head as sculpted by David Černý.

PokeHaus, in keeping with the spirit of Quadrio’s design heritage, has crafted a space that is an artistic statement of its own. Authentic & remindful of its Hawaiian-Japanese culinary roots, the location will greet you with visions of a tropical escape.

When you enter through the door of PokeHaus you can highlight several things: its large glass window, which generates a cozy atmosphere of freedom, its large stone bar full of multiple colors where you can see how they prepare your poké live: the orange of the salmon, the green of the wakame, the dark of the seeds and the most original: the menu.

More than one will have put aside their culinary tastes and dared to try a poké of something new just because of its name. It is a difficult choice between “Salmon L. Jackson”, “Bart Shrimpson” or “Tuna Turner”, because, apart from the fact that they all look very good, they also have unbeatable names belonging to popular culture. 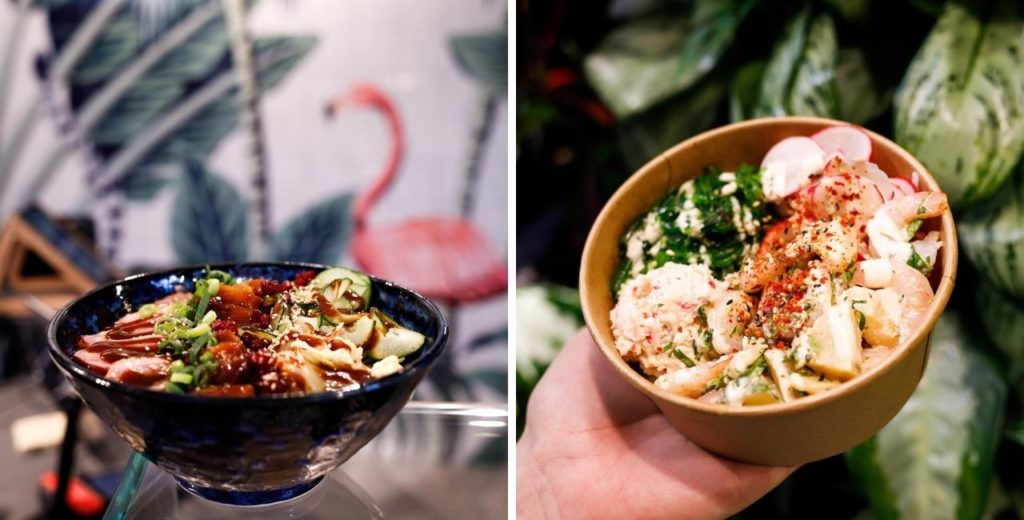 Are you a fan of Tarantino’s movies? Maybe “Pulpo Fiction” is your favorite. Are you more of a dinosaur movie fan? Don’t worry, because “Jurassic Pork” was made for you.

A long, tiring and rainy day at work can turn into a laugh when reading the PokeHaus menu. We are -too- used to sobriety and seriousness, and that’s why things like this make our day a little bit brighter

In a world that is increasingly focused on well-priced, high quality, and healthy food, the new PokeHaus location is a breath of fresh air for the area