The cost is 570 CZK. All the money raised will be used to help the people of Ukraine who are suffering from the war.

You can buy a pillow here

When Zelenskyy was elected president of Ukraine in 2019, many citizens expressed skepticism. Though he won the vote by a wide margin, the closest he’d ever come to holding political office was as an actor, playing the role of president in a popular sitcom.

Today, he has shaken off many of those reservations and established himself as a respected leader who’s been praised globally for his calm demeanor, clear communication, and loyalty to Ukrainian citizens as Russia ramps up attacks. 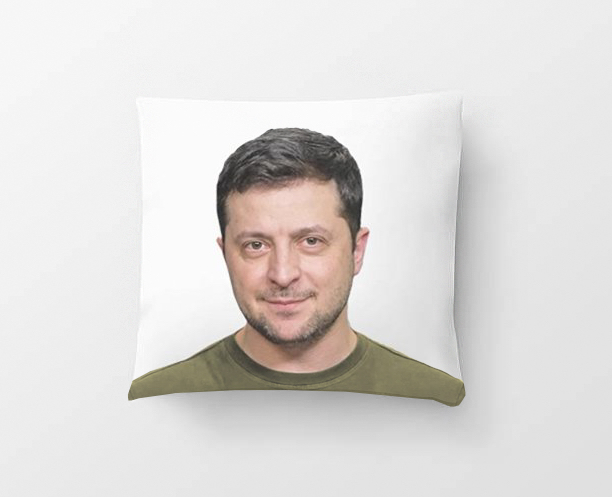 Entertainment was a path to prominence

Zelensky is Jewish and grew up in the southeastern part of Ukraine. His grandfather fought for the Soviet Union during World War II, while some other family members died during the Holocaust.

Upon graduating with a law degree, Zelensky entered the world of entertainment, beginning his career as an actor and comedian.

Zelensky rose to prominence as a star on the popular Ukrainian television program “Servant of the People,” where he portrayed a beloved high school teacher who showed disdain for corrupt politicians and ended up becoming president of the country.

Zelensky also competed on Ukraine’s version of “Dancing with the Stars” in 2006, and clips of his routines have gone viral on social media.

Campaigned on peace with Russia

Zelensky was elected president in 2019 after running on a campaign promising to negotiate peace with Russia and reduce the power of corrupt oligarchs who control much of Ukraine’s economy.

Although he successfully negotiated a prisoner swap with pro-Russian separatists early in his presidency, diplomacy with Moscow stalled due to Russian President Vladimir Putin’s demands that Ukraine stay out of Western alliances.

As tensions have escalated between Kyiv and Ukraine, Putin had accused Zelensky’s government of being a pawn of the West.

Russia seized the Crimean Peninsula in 2014, leading to the creation of two pro-Russian separatist regions and beginning an eight-year conflict that left 15,000 people dead.

Zelensky become a household name in the U.S. for the role he played in the first impeachment of former President Trump.

During a 2019 phone conservation, Trump urged Zelensky to help investigate then-presidential candidate Joe Biden and his son Hunter Biden, who served on the board of a Ukrainian natural gas company.

The phone call with Zelensky led Trump to be impeached by the House for using his office for political gain, as he also withheld $400 million in authorized military support for Ukraine.

Zelensky later said he did not want to get into the politics of other countries, refusing to criticize the call with Trump.

He won the Ukrainian equivalent of “Dancing with the Stars” in 2006.

A highlights reel of a 28-year-old Zelensky twisting and dipping in a series of outlandish outfits, including a pink leisure suit, went viral over the weekend.

Zelensky dated his wife Olena, a school acquaintance 11 days his junior, for eight years before they married in September 2003. Their daughter Oleksandra was born the following year, and they had a son, Kyrylo, in 2013.

Olena has been an advocate for women and children since Zelensky took office, and on Tuesday she posted on Instagram about the bravery of Ukrainian women who are defending their country against the Russians. Zelensky has said that his family remains in Ukraine but that he will not disclose their location; he told CNN on Tuesday that he had not seen them in three days.

Share via: The Škoda 1100 OHC is one of the rarest and most famous cars in the automotive museum…