The mortgage market is down more than 80% (in volume) compared to last year and clients are experiencing the highest rates in the last 20 years.

If someone was waiting for recession, I believe now it is now safe to assume, winter is coming. At least in the real estate and mortgage world.

Anyone who has been looking to buy a property in the last few years can surely confirm, this year and the past six months, in particular, have seen a lot of changes.

While last year, as a buyer, it was quite often the case that the property was sold before you got to even see it, right now, properties are sitting on the market much longer. Last year it was common to have bid on the purchase price, right now asking 10% discount is nothing strange.

What does this have to do with the interest rates?

Well, the rate is one of the main reasons why the real estate market is experiencing a freeze like Napoleon in Russia. No? Two puns in one article is too much? Alright…

The good news is, it seems like the rates are not going much further. At least right now. For about four months the best mortgage rates have been in the same range: between 5.5% and 6%. At a recent board meeting, the Czech National Bank also decided to keep the 2-week repo rate unchanged at 7%, which is one of the main drives for a possible change in the mortgage rates.

In the Czech market, there are two main statistical sources for watching the rates: 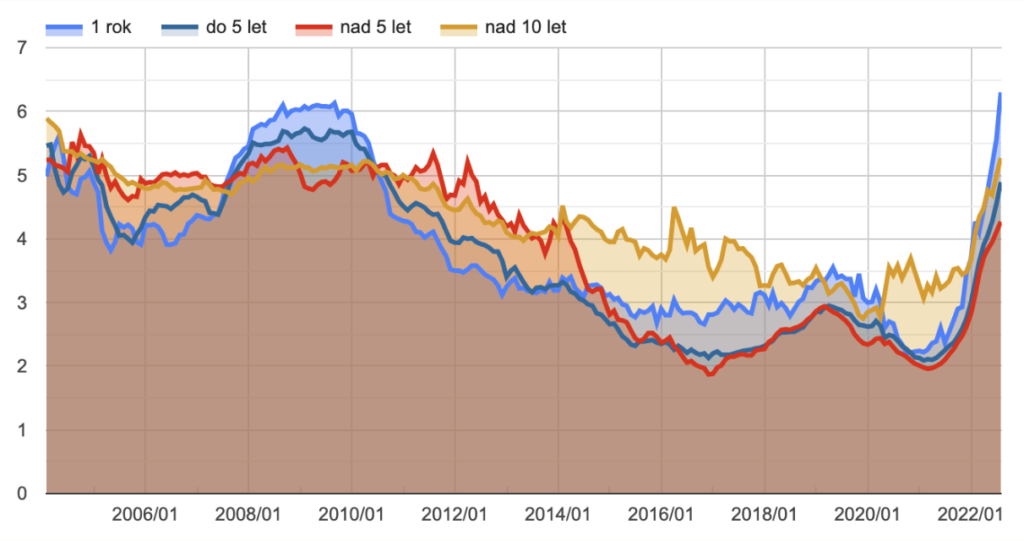 The feedback from most experts in the industry is that we should not be expecting any significant drop in the following year, maybe even until the end of 2023.

The volume of new mortgages in October was just above 6 billion CZK, same as in September.

Finally, it seems like inquiries have stabilized for the second month in a row, let’s see how the next two months will perform. Usually, the end of the year is nothing exciting in terms of new mortgages being signed, but some banks, in order to fulfill their quotas, might surprise with some last-minute interest rate discounts.