Korzo Národní is the annual celebration of Velvet Revolution in 1989 with a varied programme on National Avenue (Národní třída).

The organisers from Thanks That We Can association promise a variety of cultural experiences, including author installations, theatre performances and concerts. People can look forward to almost 90 program parts.

In addition to commemorating the revolutionary period, event focuses on current topics and social challenges. There are debates on upcoming presidential elections, European issues and Russian war aggression in Ukraine. As in previous years, attention draws to the memorial site and people will also be able to light an online candle thanks to the organizers.

The ninth-year celebration of freedom is marked by motto “We must take care of freedom“. The organisers want to commemorate the anniversary of the Velvet Revolution with dignity while taking into account current social challenges in the program.

“Korzo Národní this year brings almost 90 program parts that will fill the scene of the Velvet Revolution. We have designed the celebrations to remain primarily civic. Visitors who want to quietly commemorate 17th November, but also those who plan to use festive day to reflect on the current state of our society and democratic values, will find their place,” explains Jan Hlaváček, director of Korzo Národní.

Throughout the day, a satirical street theatre adds to the atmosphere with images of past communist regime, such as actors in VB (public safety) uniforms. 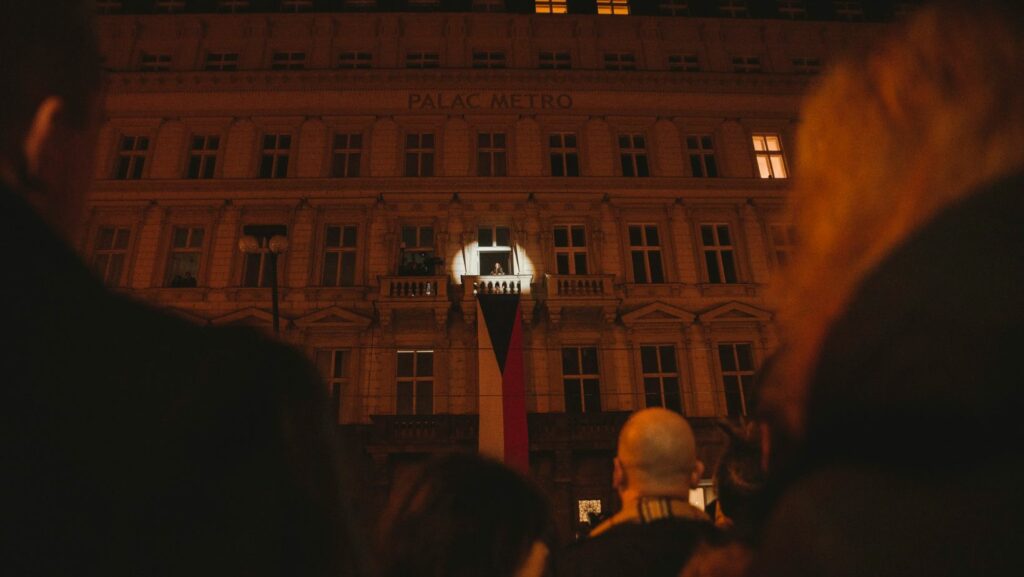 Centre of event is 17th November Memorial Plaque, where people come to light candles and lay flowers on anniversary of the revolution each year. It is possible to honour November events remotely by placing an online candle with a message at the memorial through volunteers. Events around the memorial are available to watch on Díky, že můžem social media or www.korzonarodni.cz website.

At 1 pm is performed Czech national anthem. From balcony of Metro Palace, at the traditional symbolic 5:11 pm, an anthem of the Velvet Revolution – Modlitba pro Martu (Prayer for Marta) is played.

This year, the singing is preceded by a procession of choir composed of students from theatre university in Prague (DAMU), referring to the student procession in 1989. Along the way, students are singing iconic revolutionary songs or Ukrainian folk songs in solidarity with the militarily occupied state.

In the morning a Velvet Brunch is happening outside on the avenue, accompanied by ČVUT Academic Orchestra. The profit is going to a non-profit organization to help single mothers. Several audiovisual installations add to the atmosphere of the celebrations. Under the name Anton VB – van parked near the place of the clash between police and demonstrators, there is an audio installation reflecting the revolutionary days of 1989.

Passengers got the atmosphere of authentic testimonies of participants on both sides of the barricade. Another installation focuses on the persecution of the faithful during the regime and is located in Church of St. Voršila. 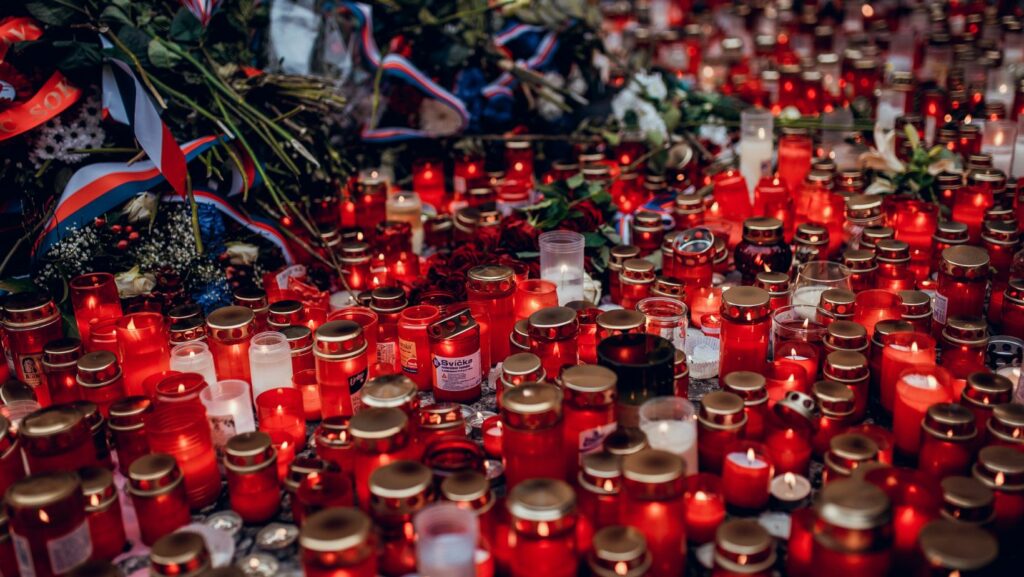 This year’s new installation We Call For Help is located in a telephone booth at the piazzetta of the National Theatre. It shows visitors the everyday reality of people living in social distress or on the margins of society through phone calls and real testimonies.

Celebrations feature two music stages with a dozen singers and bands, including young singer-songwriter Amelie Siba, Sisa Feher, Vladko Mikuláš and their jazz project Bardo, and a choir from the Union of Czech Choir. Václav Havel Living Room with a literary program is placed next to the New Stage of the National Theatre.

Not only texts by Václav Havel are read, but also contemporary Czech authors from mouths of Czech actors and well-known personalities. In theatre auditorium of the National Theatre, there is a debate block prepared with the Czech media and focused on current social challenges.