In the heart of Prague lie restaurants Cali Brothers, Burrito Loco, Agave, and Bohemia Bagel. These establishments all have one thing in common, and it’s Scott Kelly and his partner Glenn Spicker.

After interviewing Scott we got some insight into the inner workings of these establishments and how they came to be. Scott always knew he wanted to be a chef and went to culinary school in New York where he worked before relocating to Los Angeles.

Originally from California, he set roots in Prague “over 20 years ago” when he was on a trip through Europe. “I didn’t move here, I was just traveling,” he said, also adding “I was probably traveling for a year and a half, and just came to visit and came back and found a job,” and the rest is history.

“It just clicked, everything came together,” is his reply when asked why he moved to Prague. On his first day in Prague, he landed housing and a job. Scott has lived in the same neighborhood and hasn’t been out of work since relocating.

“From there I found other cooking jobs, I was a chef in Palffy palace for a while,” he added.

When asked how he met Glenn he laughed and said “Iron Door”, this is an infamous club in Prague and happened one fateful night 15 years ago.

Glenn is from Connecticut and the reason they chose the name Cali Brothers is that “We both have California drivers licenses.” Bohemia Bagel was already open when they met but they launched Burrito Loco, Propaganda, and Agave.

Cali Brothers was originally a Czech restaurant 15 years before Glenn and Scott took it over. It is also the location of their central kitchen which also houses the bakery downstairs that makes all the bagels and bread.

After some time he decided to spontaneously move to Russia where he lived for six months. “I tried to run off to Russia and was working in Moscow for a while,” he said. He traveled there because he says “it was the most outrageous thing I could think of.”

He described arguing with someone and quitting his job on the spot so he could drive to Moscow “I just looked over at the cleaning lady where I was working while I was arguing and I said ‘Ya I’m leaving, I’m quitting, I’m gonna drive there in a Lada and I’m gonna work in Moscow and six months later I was in Moscow and working there,” he explained.

There he was a consulting chef spending his time elevating menus. However, while there he confessed to having a hard time getting paid. To add to the adventure he added, “I lost my passport so I lost my visa, then I couldn’t leave the country but luckily I had my Lada so I slept in my car until I got my exit visa.”

When asked why he came back and stayed in Prague he said “Everything came together, my first day looking for a job, my first day in Prague I found an apartment, I’ve lived on the same street for 20 years, I have never been out of work.”

If you get the opportunity to visit these fine establishments you’ll now know how they started and where they are going. 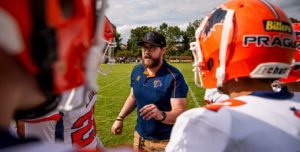