The overall epidemiological situation in the Czech Republic is progressing well, but in some areas, it is necessary to be careful, said Health Minister Adam Vojtěch.

In order to combat an uptick in coronavirus cases in the country, Vojtěch presented the Czech regional traffic light rating system, which has four levels.

The worst situation is still in Prague, the Moravian-Silesian region, and the Jihlava region.

“There are four levels,” Vojtěch announced at a press conference. Zero-degree areas show where the risk of infection is minimal or zero. The first level is marked in green and means a sporadic occurrence of the disease but without community transmission.

“The second degree is symbolized by a yellow color. These are areas where we are already monitoring a certain community transmission of the disease,” Vojtěch further explained.

The last level, the third, will be shown on the map in red color.

“These are areas in which we are monitoring the growing community transmission and the risk of infection is significantly higher,” said Vojtěch. 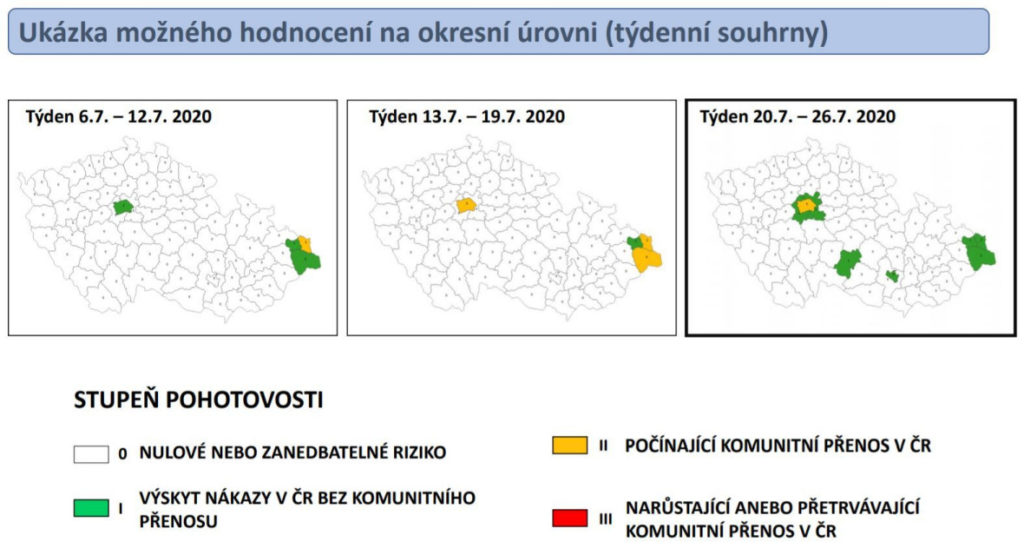 The director of the Institute of Health Information and Statistics, Ladislav Dušek, showed a picture of what the maps might look like.

“The first publication of maps, which will also go through the regional Public Health Offices, will take place at the beginning of next week, on Aug. 3,” the head of statistics specified, adding that the maps will be updated every week.

“In the end, we decided to go to the level of individual districts. We originally thought about publishing the data for whole regions, however, some regions are large and it would not be completely objective, “said Vojtěch.

According to the minister of health, the situation in individual regions differs significantly. For example, the Moravian-Silesian Region or Prague would currently reach a medium, yellow level, Vojtěch said on Sunday.

The most affected region is currently Prague, Dušek specified. There is also a risk in the Jihlava region.

“The capital city of Prague is the place where the infection persists. In the last month, we have again observed a larger increase in diagnosed cases,” said Dušek.

“The situation is generally good, we do not observe an escalation of the disease in vulnerable groups, which is positive news. Most cases are asymptomatic,“ said Dušek, noting that mortality does not escalate either.

“The virus may have lost its power a bit,” he added.

On Monday, the number of confirmed cases of the disease has increased by 195 to a total of 15,516 since the beginning of the epidemic.

Prague Morning@PragueMorning
68 Following 2.1K Followers
The #Czech Republic’s new #COVID-19 infections accelerated as it reported more than 3,000 cases in a single day for… https://t.co/IkkW8XFxCV
4 hours ago
4
From midnight on Friday to Saturday, new restrictions will apply to clubs, discos, and bars across the whole countr… https://t.co/nhgHkqfSmC
23 hours ago
1 4