The date for this holiday used to be March 9, but Pope Pius IX changed the date because July 5 is when St. Cyril and St. Methodius arrived in the Moravia region.

In an effort to limit the influence of encroaching Germanic neighbors, Czech Prince Rostislav in 863 invited Byzantine monks and brothers Cyril and Methodius (Constantine and Methodius) of Thessalonica to come to the Czech lands to preach the gospel in the Slavonic language (a predecessor of Czech).

To spread the Gospel among the Slavs, they translated the Bible and other religious books and helped to spread the Old Slavonic Language, or staroslověnština [transl. from Czech].

The two brothers are considered the founders of Slavic literature and are sometimes known as the “apostles of the Slavs.”

The arrival of these heralds on our territory at the time is referred to from the point of view of history as the arrival of Christianity and education in the Czech lands.

On this day every year, thousands of Czech Roman Catholics gather at the Basilica of the Assumption of the Virgin Mary and Saints Cyril and Methodius in the south Moravian town of Velehrad, once the seat of the Great Moravian Empire, where they arrived in 863. 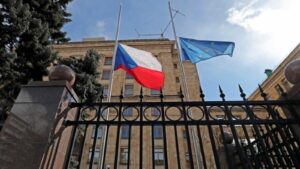