In this century, coronavirus will mark pretty big time in history and it has already resulted in many changes. In such “big times,” people get creative and come up with a whole new vocabulary that reflects their current reality. Such words can be found in Čeština 2.0. and now also in Vocabulary Miner

Project Čestina 2.0 covering a variety of the modern Czech language with its slangs and new words has joined forces with Flashcard app Vocabulary Miner. They are bringing new words not only to Czechs but also to expats in two corona-themed Word lists that can be found in the app under the keywords corona or #sayMoreInCzech.

“Language is like a fingerprint of a nation, it consists of everything and everybody,” says Martin Kavka, founder of Čestina 2.0.

“Thanks to Martin Kavka, Čeština 2.0. mirrors the spirit of our times. Čeština 2.0 with  Flashcard app Vocabulary Miner has created space to #saymore, as our motto goes, and to play with words and one’s imagination. Coronavirus affected everyone so we wanted to include expats because the life of the Czech language touches the lives of half a million foreigners in Czechia, too,” adds Zuzana Pápayová.

Czech is playful, also for foreigners

Martin Kavka created Čeština 2.0, a platform similar to Urban Dictionary in 2009 for collecting words and slang of the common Czech language to show its life and wit. He believes that although there is standard official Czech, it’s varieties are often like a foreign language also to Czechs.

“I think there are many different Czech languages. The more various Czechs you speak, the more you are a Czech. Therefore,  I am really enjoying these overlaps of the language and foreigners. With this kind of Czech, foreigners can become a different kind of Czech,” says Martin Kavka about the cooperation. He already put his work into the expat world through a Czech Radio show for Spanish-speaking enthusiasts of unorthodox Czech.

As for the new corona words, the cooperation gives answers to the following questions:

What do you call the belly fat gained during the corona or the alcohol used as an internal anti-COVID 19 protection? Who will you meet in a store during the corona crisis? And when does coronormalization start?

Answers are now available in the Flashcard app Vocabulary Miner with English explanations under keywords #sayMoreInCzech, Čeština 2.0, or corona.

“Language is a living organism. The Flashcard app makes it vivid and interactable. You can practice your brain in a quiz,” explains Zuzana Pápayová, the coordinator of Vocabulary Miner. 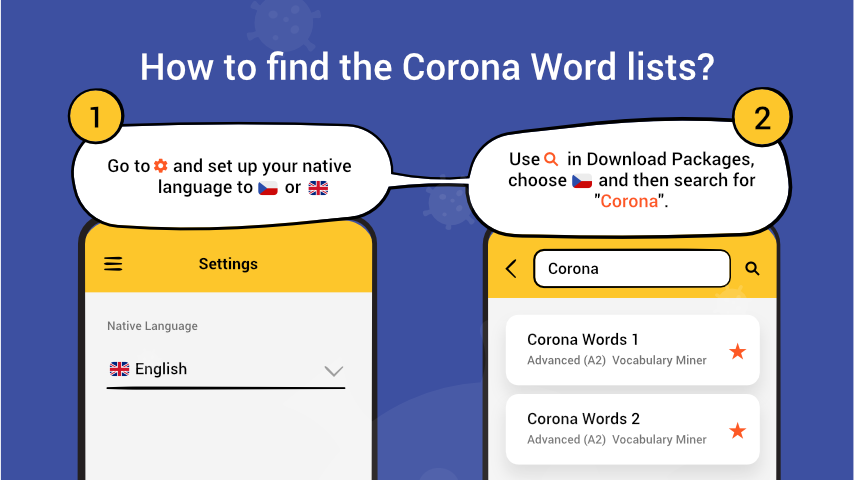 In the following weeks, there is a plan to create three more unique Word lists in the Flashcard app with carefully chosen words from Čeština 2.0. It should cover the topics of corporate talks and politics that are topical in these times. If successful, the Word lists from Čeština 2.0 will pop up on a regular basis. You can follow the project on Instagram and new words daily in Vocabulary Miner’s Instagram Stories.